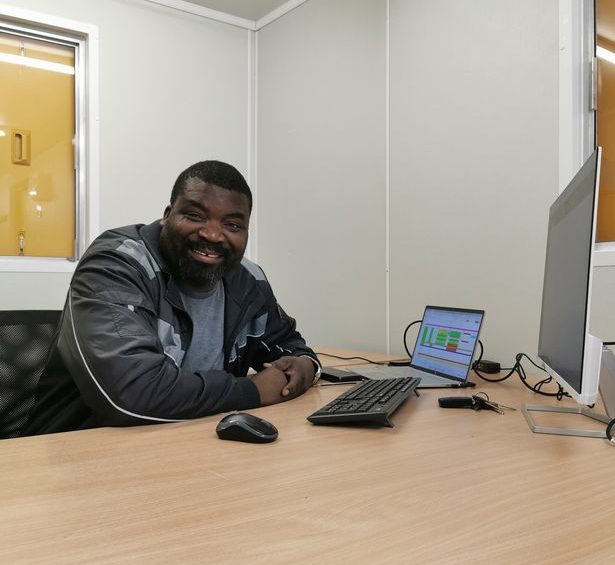 A man from Yorkshire who used to deliver eggs for a living now has two degrees and his very own logistics company he believes will rival Eddie Stobart in an inspirational story of success.

Elias Chiguvi, who lives in Leeds, is the owner of Wilsford Transport Ltd, a haulage company that operates around the UK with multiple contacts ranging from fridge work, box work, distribution and container logistics. The company operates a large fleet of HGVs as well.

But rewind to 2007 and nobody could have imagined Mr Chiguvi would be a successful businessman employing 50 people. But Elias had big dreams and embarked on a knowledge-finding mission, to prepare himself for entrepreneurship.

Mr Chiguvi, who was born in Harare, Zimbabwe, told Yorkshire Live he was working as a van driver delivering eggs and croissants to hotels in London when he had an epiphany. He said: “There was a time I was going to do deliveries to Heathrow airport for airline food.

“I saw trucks and said to myself ‘why can’t I drive these trucks? When I enquired with the training company that trained to drive trucks, they said they were giving a package for learning to drive and CPC management. I didn’t know what it was and then I said I want the whole package.

“They sent me some books to study and at the same time I went for lessons to drive to which I passed. I then realised what it was that I have just passed and the responsibilities that lay with this.”

Mr Chiguvi, who wants his company to one day be as big as Eddie Stobbart, then enrolled at Huddersfield University. He said: “When I passed my CPC management and HGV Licence, I thought about doing a degree on this and went to study my BSC in transport and logistics at Huddersfield University because I wanted to do it perfectly when I started my own business. I did my masters in business and science at the same university.”

After he completed his Masters degree, Mr Chiguvi sought to gain real world experience and worked for Amazon for two-and-a-half years. He saved up and bought three trucks and started his own business.

In a short space of time, Mr Chiguvi’s fleet has risen from three to a massive 37 HGV trucks. He said: “We started with three trucks, which then quickly doubled and doubled again to the point we are now running closer to 37.

“This has not always been easy and has taken a tremendous amount of hard work and dedication. Blood, sweat and tears have gone into the success of this company and with a strong team behind Wilsford Transport Ltd we are eager to see the future growth of the business as a whole.”

Although he is now an affluent businessman with a portfolio to show for it, Mr Chiguvi says his company still reflects his Southern African roots, and he thanks his family for inspiring him. He said: “My family was one of my biggest influencers and inspirations, as we all have business backgrounds.

“I wanted to create something of value yet keeping my roots at the foundation of the company. I come from a Shona family in which we lived a very full and modest life. Zimbabwe is such a beautiful and diverse country and coming to the UK is one of the biggest yet hardest decisions of my life, but I was ready to start over and embrace the new adventure and challenge myself for a better life.”

Mr Chiguvi says running a business is not all sweetness and light and told Yorkshire Live he has considered quitting several times. He said: ” It has been up and down, sometimes I would consider selling or closing the business due to the day to day pressures and then I remember how many people rely on the business as we now employ over 50 employees.

“Then there are times which make the bad times seem worth it to see the growth and what those bad times have pushed us to improve. Running a business is a lot more than what most realise, people around you only see the tip of the iceberg and not all the work done underneath it but in the end it is all worthwhile and will continue to be in the years ahead.”

But, for now, Mr Chiguvi carries on, and he is on a mission to not only grow his company, but to also make sure his employees become successful business people too. He said: “We are aiming for success, not only for Wilsford Transport Ltd but for all of its employees.

“We want to expand the business in different avenues, all still related to the logistics and transport sector but with the progression and growth of Wilsford Transport Ltd we are optimistic that our new challenges we are wanting to take on will be as successful as what we have experienced over the last few years.”