When all you want is to go home. Passenger arrives 13 HOURS early for flight to Zimbabwe

When all you want is to go home. Passenger arrives 13 HOURS early for flight to Zimbabwe 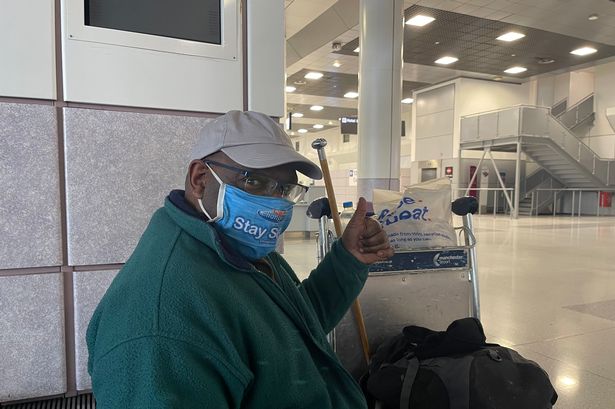 A father of two says he arrived over 13 hours early for his flight at Manchester Airport to avoid the queueing ‘madness’.

Tim Samunyai from Coventry arrived at the airport at around 5:40am for his 6:55pm flight to Zimbabwe yesterday.

The 56-year-old says he came to the airport so early because of the recent reports of chaos which caused him to ‘panic’.
Despite having to wait a very long time, Tim said he was glad he came early and used it as an opportunity to ‘de-stress’ and prepare himself for the journey he described as a ‘spiritual timeout’.

Speaking to the Manchester Evening News he said: “I was thinking if I come here nice and early then I won’t have to deal with all that madness over there.

“I don’t know if I was panicking because of the news just highlighting the negativity or whatever.

“But there was no differentiation in the reporting, you saw queues for check-ins at TUI, EasyJet or Jet2 and it was choc-a-bloc,

“My problem was not realising that, its a panic if you’re going to Corfu, Greece or Tenerife because everybody wants to go there, and it’s half term.

“But if you’re going Africa, then there’s no issue.”

This week passengers have been arriving to Manchester Airport early in a bid to tackle to the chaotic scenes of long queues for security and crowded check-in halls. Airlines and travel firms have encouraged people to arrive with plenty of time to spare.

Tim said that he brought a chuckle out of a member of staff who told him he ‘broke the record’ for a person the person who has arrived earliest for their flight.

For the long wait bought himself four books to read as well as a tablet to keep him entertained and had some sandwiches and pastry goodness keep himself fed.

He found himself a small corner at the bottom floor of terminal two where he had a nap before checking in at around 3:30pm.

He told the MEN: “I’ve got some sausages rolls and I had two steak beaks,I’ve got my motivational books to read and a tablet too.”
“13 hours is a bit much, fair enough, but I’d rather be early.”